Particularly in the digital age.

Understanding Bibliometrics will help you increase the visibility of your publications.

Bibliometrics are measurements that are based on published works.  Often bibliometrics are used to help determine research productivity and research impact which in turn are influential in decisions on the promotion and hiring of academics.  Needless to say, all bibliometrics should only be used in the appropriate context:  usually the academic discipline in which the work appears.  Traditional metrics are generally based on citations and other scholarly references.  Altmetrics generally involve mentions in social media and downloads.  Although currently there is a distinction between the traditional metrics and altmetrics, this distinction is likely to disappear over time.

Bibliometrics are generally applied to books, journals, articles, and authors.  A summary of the different metrics can be seen in this figure. 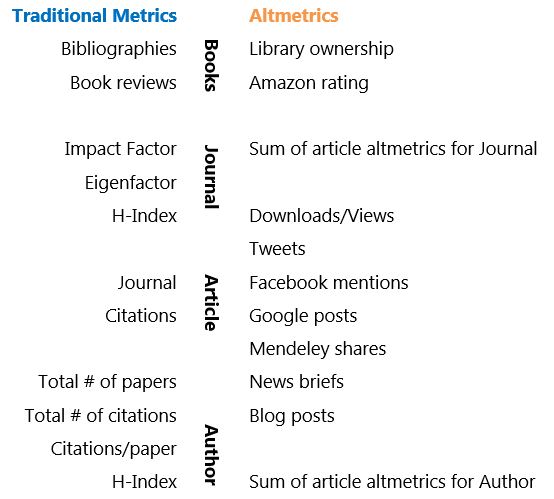 Increasingly, book chapters can be tracked the same way that articles can be tracked.  However, traditionally the mark of success for a book was to be listed in a bibliography for the discipline and to have the book reviewed in as many journal as possible.  Alternatively, we can count how many libraries (academic and public) own your book and also even look at the Amazon rating for a book.

Some journals “count” more or are “ranked” higher; and often scholars are encouraged to publish in these "good" journals and libraries will tend to subscribe to these "influential" journals more.  Impact Factor is one of the main metrics for journals and is the average number of citations received per paper for a given journal during the preceding two years.  A lesser known metric is Eigenfactor which measures of how much time readers spend with a journal and is greatly influenced by the number of articles in the journal.  One metric that is starting to grow in popularity is the H Index which is also highly influenced by the number of papers published.  Altmetrics for a journal is simply the sum of all the altmetrics of each of the articles.  You may have seen the altmetric torus (from the actual company altmetrics) which gives the total number of “mentions” and the colors of the torus indicate what kind of “mentions.”

Traditionally, journal articles are first evaluated based on what journal it is published in.  Then, articles are evaluated based on the number of citations it has.  Keep in mind that different databases will give different citation numbers.  For almetrics, the main measurement is at the article level which is why sometimes people equate altmetrics to article metrics.  Article altmetircs include downloads/views (both from the publisher’s website and repositories), social media mentions, and more formal newsbriefs or blog posts about the article.

Traditional author metrics are a summary of an authors's work and influence and are often listed on CVs.  They include the total number of papers and the total citations and the average citation per paper.  But the total and average citations can be greatly influenced by a single paper if it has an overwhelming number of citations. H-index (the number of papers h that have been cited at least h number of times) gets around this problem somewhat; but it is highly influenced by the number of papers that have been written so when comparing people, one can normalize it by academic age (or the years since receiving a PhD). The altmetrics for authors are based on the sum of the altmetrics of their articles.